Forbidden Corner: Not quite a “family” day out!

After looking for places to visit during the Easter holidays, we came across the Forbidden Corner which is located in the Yorkshire Dales. Advertised as a four acre garden of labyrinths, chambers and follies, it sounded like it could be fun, family day out.  However, it wasn’t quite the “family day out” we were expecting. With a tag line of ‘The strangest place in the world’, the Forbidden Corner really did live up to its name of being slightly odd!

I booked tickets for myself and my husband in advance, as stated on the Forbidden Corner website due to limited tickets, which came to £26. Under 4’s go free so we did not need to purchase a ticket for our 2 year old. On the day, we noticed another family buying their tickets at the desk so it’s possible to purchase on the day if you want to be a rebel and break the rules! I’m anything but a rule breaker so I did as I was told and didn’t take the chance.

When we got to the attraction, we found ample free parking as there was both a main and overflow car park. Both car parks were close to the entrance. Once inside, we waited a very short time to be admitted and were given a short explanation of the park along with a leaflet which had a checklist of things to look out for. There is also a brass rubbing sheet if you want to do this trail too. And that was that, into the unknown we went!

Note: You are not given a map as this would completely defeat the point of it.

The Day (without giving too much away!)

Our fun at Forbidden Corner started from the very beginning with our entrance being through the mouth of a dragon-like creature.

This led into a garden filled with a puzzle of paths and quirky statues. My little one had great amusement toddling along, trying to avoid dead ends and discovering hidden surprises. I, on the other hand, took it a little too serious and insisted that we use my maze survival technique of following the wall around until we found our way out. Hubby thought this would ruin the fun…

My little one loved seeing the gnomes enjoying a game of cricket and the bears playing cards. However, be prepared to get wet during your visit as there are lots of sensor triggered water jets. We highly recommend appropriate footwear and clothing! (I also recommend sending your other half or children first and paying close attention to where they stand)

Deeper into the gardens, we started to discover the different follies and winding tunnels. These can be a little disorientating but enjoyable nonetheless! Some areas, such as the underworld, are dimly lit and a little bit creepy for younger children. Our 2 year old (and mummy….but we won’t mention that) managed but found the hidden surprises a bit too scary in here! Luckily, there are cryptic signs to warn you of areas that may cause anxiety. Do pay attention to these signs! Also, remember to close the doors behind you so you don’t spoilt the surprises for others.

One of the noteworthy parts of our visit were the breathtaking views. There are plenty of places to sit to enjoy the beautiful Dales but alas, it was extremely windy on our visit so it was a quick snap and then back into the shelter of the trees!

All in all, we spent around an hour and a half exploring. However, we missed quite a few areas off our checklist and we also didn’t bother with the brass rubbings. The hunt for these would have added extra time to our day.

Watch the video for more of what’s to see (Warning: spoilers): 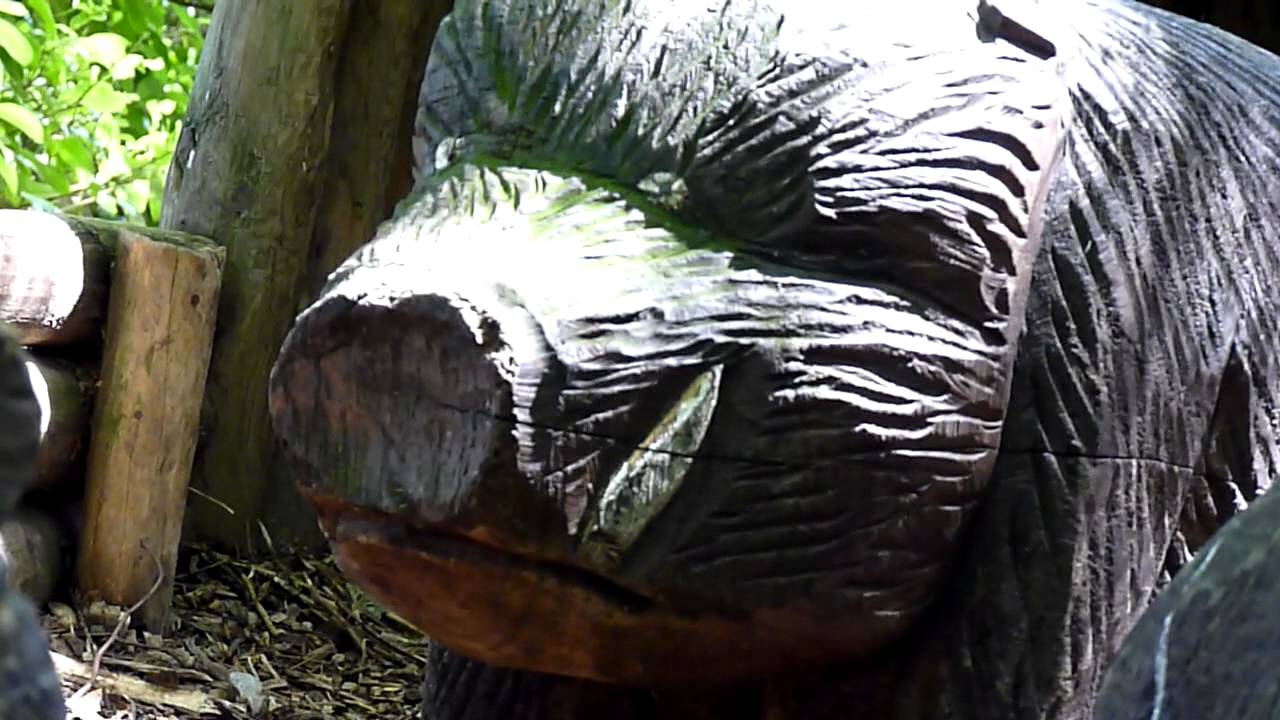 There is a cafe, which sells local produce, if you are wanting to eat. We found the prices to be reasonable, service was quick and the children’s meal portions were generous. However, our adult meals weren’t much to write home about. My chicken burger was a tad flat and the mayonnaise had somehow evaporated into thin air. Hubby ordered a ‘Massive Farmer’s steak pasty’ which threatened him that it was “not for the faint hearted”. Well, that pasty was like the skinny kid at school demanding that his friends “hold him back” whilst he shouts empty threats to anybody that will listen! In other words, it was disappointing.

Alternatively, there is a picnic area if you want to bring your own food.

During our visit, we spotted three different toilets. One of these was in the car park and another was just before the entrance desk. The third one was in a tunnel in the underworld. However, I don’t recommended sending your children in there alone…unless you want them to spend all of eternity here as the bolt is extremely stiff and difficult to open!

Although we enjoyed the day, there were a few bugbears that we just have to talk about.

One of our biggest bugbears is the lack of exit or toilet signs. I appreciate that it is a maze but when you have a two year old that needs to go pee then guess what? They neeeeed to go pee! Asking them to hold it in for five minutes is futile because who knows when you’re going to emerge from the depths of those never ending tunnels!

Another is it would be helpful to have more cryptic clues which would dissuade people from entering a particular way. This might stop people from trying to enter narrow tunnels against the flow of the traffic. Unfortunately, people left their common sense at the entrance and were trying to enter places that tens of people were trying to get out of thus preventing anybody from moving anywhere.

My final niggle is the lack of staff on the grounds. I have read responses to negative reviews saying that they have staff in fluorescent jackets patrolling the grounds constantly. I can hand on heart say that I didn’t spot a single streak of fluorescent anywhere. Either they weren’t there or there were very few (maybe one?). Considering that there is absolutely no phone signal in the attraction, this has got to be a Health and Safety breach? It would be helpful if there were more staff members in prominent places to help with getting to exits (and toilets!).

Overall, we did love the Forbidden Corner. There is plenty to discover and lots for families to do. Personally, I think the attraction is better for older children and adults as I don’t think it quite facilitates younger children. I guess this is why under 4’s go free. I also would not recommend the attraction if you have a nervous disposition; there are lots of surprises, narrow tunnels and dimly lit areas. However, if you like that sort of thing then it is perfect for you!

Looking for other days out? Have you tried Helmsley or Belsay Castle?

This site uses Akismet to reduce spam. Learn how your comment data is processed.

This website uses cookies to improve your experience. We'll assume you're ok with this, but you can opt-out if you wish. Accept Read More